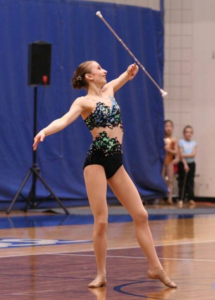 The Trick is to Never Drop that Stick!

How does something that started out as an old military rifle trick evolve into this unbelievable and magical display, like something straight out of The Matrix?! Is it dance? Is it juggling? Is it capoeira? Although it seems like a combination of the three, it is actually a form of juggling that appears to defy the laws of physics. In the following we’ll explore how baton twirling has transformed from its early army origins, to an internationally competitive sport, to the eye-popping nouveau cirque arts of contact staff juggling and fire staff.

Beginning in Asia and Eastern Europe, baton twirling found its roots in the exhibitions of marching military parades and public appearances, with soldiers spinning and manipulating items such as knives, guns, and swords in a display of warrior prowess. Eventually this spinning of rifles progressed into the manipulation of a mace or club. After the Civil War, Major Millsap brought the practice of twirling to North America when he founded Millsap college in Mississippi.

Following World War II, many marching bands such as the American Legion began incorporating twirling acts into their marching routines. The construction of the clubs was adjusted to lightweight and hollowed-out metal rods (such as aluminum), balanced with ends of light rubber, for easier and more accurate manipulation. Some believe these adjustments were also the result of the introduction of drum majorettes, making the baton lighter for women.

In 1977, baton twirling organizations from around the world met in London to form the World Baton Twirling Federation, with American John Kirkendall assigned as the first founding president. The formation of the WBTF was to encourage and promote the sport of baton twirling worldwide, as well as provide a platform for twirlers to meet, compete, and share their skills amongst each other.

The first world championships of baton twirling were held in Seattle in 1980 and since then a different member country hosts the competition every year. Although not officially its own Olympic sport yet, baton twirling has found a home in the Olympic competition of rhythmic gymnastics, in which gymnasts put on performances displaying their strength, agility, and artistic talents using medium such as rope, hoop, ball, ribbon, and similar to a baton, club.

Some may dismiss twirling as mere child’s play, but twirling takes a great deal of athletic ability. It is an artistic sport that incorporates elements of dance and gymnastics with the elegant and effortless manipulation of a baton, rod, or staff. Twirlers often perform routines accompanied by music, sometimes utilizing more than one baton, and always having to create aesthetically pleasing patterns while showcasing their skill and dexterity in baton manipulation by performing spins, tosses, and catches throughout the routine.

Twirling requires excellent coordination of the entire body, flexibility, strength, agility, balance, endurance, and of course beauty. Twirling routines are meant to be fluid and smooth, yet also quick and lively at the same time. Incorporating gymnastic tricks into a baton twirling routine increases difficulty and adds an element of excitement. Twirling requires plenty of self-discipline, confidence, and practice. Ultimately a good twirl routine should appear as a well-choreographed dance, with the partner being the stick.

With the advent of contact juggling by Michael Moschen in the 1980s (for more please see Zen Arts article on juggling), it seemed only inevitable that baton twirling would eventually evolve into a contact juggling sport as well. Only now the baton has expanded into a full length staff, and the twirling no longer involves tosses and catches. Like other forms of contact juggling (mainly the ball), in contact staff the rod must remain in “contact” with the performer at all times.

Contact staff has become very popular in recent years, with groups such as Brussels’ No Sweat (see video at article intro) breaking ground with new tricks, patterns, and routines. Just like flair bartenders spin bottles atop their arms and hands, contact staff performers must manipulate large rods using their entire bodies. The staff must travel smoothly, with no stopping, jerking, or sudden grabbing, in order to produce the elegant effects like we’ve seen from No Sweat. That group consists of contact stuff jugglers Jon Crott, Olivier van Itterbeeck, Michael Tono, and Kevin Arleri, a troupe that has truly taken contact staff to an entirely new realm, leaving us in anxious anticipation to see what they come up with next!

When it comes to choosing a staff to work with, the lighter the bar and the heavier the ends, the easier the staff will be to manipulate. This makes the staff behave as if its longer than it really is, giving it a wider balance point and thus easier manipulation capabilities. Staffs also must be very rigid, with no bending or flexing, as well as evenly balanced. You can find staffs all across the web, in even collapsible versions made for easy transport.

Of course from this point it was only obvious that somebody would attach wicks to the staff and light it on fire, combining the elements of fire dance with contact staff to form the completely new and dangerous art of contact fire staff juggling. Performers daring enough to try this newfangled hybrid have twirled blazing staffs around their shoulders, legs, torso, and sometimes even around another burning staff.

Of course here at Zen Arts we do not advocate trying the more advanced contact fire staff at home due to the risk of injury from potential burns. However contact staff itself, unlit, is relatively safe! So get out there, find a staff, and start practicing! There are plenty of new instructional dvds available on the web that can help you get started. Who knows pretty soon you could be performing as part of the Zen Arts crew!

Zen Arts own Srikanta Barefoot knows a thing or two about spinning fire! He is highly skilled in all forms of fire art, having worked with Cirque du Soleil for 3 years as their first contemporary fire artist and fire coach. Additionally Srikanta is an expert in the skills of capoeira, tumbling, modern dance, and martial arts, all of which he incorporates into his fire routines.

To watch him or any of our other amazing Zen fire staff performers do what they do best, call 855-ZEN-ARTS or send an email to info@zenartsla.com.